Dear Mom: If you are reading this, I want this book for Christmas, and I also think you should read this book because I think you would love it. I think the boys and Mary Lynne would love it, too.

To my general readers: I haven’t read that many Star Wars books. I never touched the former EU/Legends material. So I couldn’t tell you fairly how it compares. But this is one of the best books I have ever read, period. And I think it needs to be read. And my fellow Star Wars geeks on Far Far Away Radio agree. Bloodline by Claudia Gray is that good. My review here contains a lot of what you would consider spoilers but Bloodline is not that fun to talk about without them. I have a lot of feelings for this book. 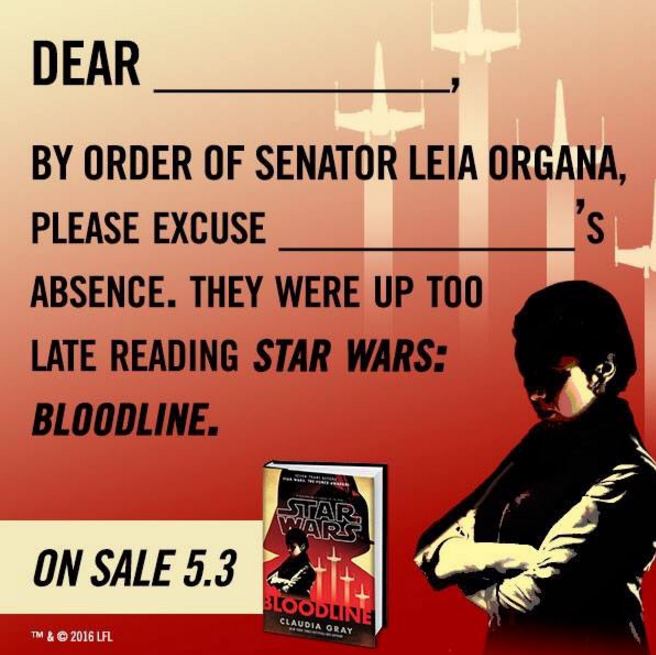 I don’t read Star Wars books so much for the stories as to explore more of that universe. Bloodline gives us a spectacular view of the political, social, and criminal climate of that particular galaxy far, far away about six years before The Force Awakens and gives us more context for some of the events in Episode VII. While the film itself probably needed to explain Leia Organa’s estrangement from the New Republic government a little better for its own audience, that kind of exposition probably goes much better in the format of a book than a film, as FFAR suggests. Hence why I think it is a good thing that Star Wars exists in multiple media formats. Different parts of the story go better with different mediums.

Getting back on track here, Bloodline is not only a great (and timely) social and political novel, it is also a spectacular portrait of one of the best and most beloved characters in the Star Wars franchise. This version of Leia is more hardcore than anything I could have dreamed up. I want to know how much Gray was channelling Carrie Fisher—Carrie has always influenced Princess Leia to some degree or another, but in Bloodline you can really see Carrie in Leia’s attitudes and mannerisms.

So here we are, six years (according to reports) before The Force Awakens. Leia is a member of the New Republic senate and she is a hundred percent DONE. The political body has become gridlocked in partisan debates between the Centrists, who want a more powerful central government, and the Populists, who want to minimize central control. Leia works with the Populists but she is clearly a maverick who sees the problems that the two-party system is causing. Leia sees a chance to make a difference when she volunteers to investigate a criminal cartel, but she also gets caught up in running for a political office she clearly doesn’t want. Thrown into the mix is Centrist senator Ransolm Casterfo, a young, vain politician who also happens to be a fanboy of the Empire. Yet as Leia gets to know Ransolm better, it turns out that he’s a lot more disaffected with his own party than she realizes—and just the man she needs to help with her investigation. Their effort is not so much bipartisanship but a teamup with the oddballs of both parties. I think their friendship kind of points out the danger in a politically charged environment of stereotyping someone just because of their political affiliations: you get so caught up in party politics that you forget that the people across the aisle are actually people.

Personally, I don’t think that the new Lucasfilm canon has to go so far as to dramatize that the whole galaxy knows that Darth Vader is Leia’s birth father, but you have to have a reason for her limited number of allies in TFA. And that plot point does make for an interesting read. When you think about it, would YOU be comfortable telling people that your birth father was one of the most evil people to ever live?

Moral of the story: it’s okay to trust people with your tough secrets. In fact, you should trust them so they’re better equipped to help you. Yes, Vader is Leia’s biological father but he also abused and tortured her. They had no father-daughter relationship whatsoever—unless you count torture, abuse, hurting her friends and blowing up her planet parental abuse.

But Leia not telling Ben—are you kidding me, Lucasfilm? Do you realize how much of the blame that puts on Leia for Ben turning to the Dark Side? (Not that I blame Leia for any of that, but still.)

So, I stand corrected, as far as we know in Bloodline Ben has not turned to the Dark Side (yet) and his turn probably isn’t linked to Rey being abandoned on Jakku. There is a lot of interesting discussion on FFAR and its affiliate podcast Legends and Lore about where Ben is at this time and how he reacts to the events in this book.

So, as far as Prequels-related material, I feel like Bloodline does actually fall kind of short in that category. We get 1-2 sentences or short paragraphs of Leia reflecting on the history of her birth parents and comparing that to her situation. It kind of hits the reader over the head and doesn’t flow as well with the rest of the text. It is good to show that Leia is conscious of following in the footsteps of her birth mother Padme Amidala. But maybe it could have been done differently. But on the other hand, we have a Gungan and a Toydarian making background appearances, and Leia gives a very awesome speech at the beginning about her adopted dad Bail Organa.

In addition to giving us a look at Leia, Bloodline also increases my appreciation for Han Solo. Even as a side character who doesn’t appear much, he’s great. Han and Leia as a couple, well, to put it bluntly, they’re not really happy to be together a lot because they have so many different interests, but they are happy to be in each other’s lives.

Not going to lie, I love Lady Carise Sindian almost as much as I hate her. She is evil and beautiful and rocks at being both. But I love Ransolm Casterfo with all my heart. He doesn’t deserve half of the crap he has to put up with. He loves what the Empire stood for—order, strength, and centralized power—but not what it actually accomplished. Being a stormtrooper fanboy, he learns to his cost, has its darker side.

As for our other side characters, we get an interesting mix. The other politicians are boring, but I guess if that’s what Leia has to put up with then I understand what she’s dealing with. Leia’s assistants Joph Seastriker and Greer Sonnel are fun. And C-3P0, as the third major film character to appear in the book, is on point in every line. Seriously, I need Anthony Daniels to read his lines for the audiobook or I’ll want my money back.

Bloodline adds so much to the story of The Force Awakens, and on its own it is a rich and thrilling novel. Characters both old and new are written with depth and warmth, and the faraway galaxy we know and love is real and exciting. It’s the chocolate cake of Star Wars novels—a satisfying read from start to finish, with quality in every ingredient.

Legends and Lore reaction to Bloodline

2 thoughts on “‘Star Wars: Bloodline’ is Amazing. That is All.”