Looking at the last ten years of Marvel movies, we’ve been through a lot of villains. A lot of them didn’t last more than one fight with the main character.

It’s not that I don’t trust the Russo Brothers (or that I don’t want to trust them). And it’s not that I don’t think that Thanos doesn’t have potential to be a GREAT villain in Avengers: Infinity War. But it is very hard to not buy into the online fandom rhetoric that Thanos hasn’t really done anything to show that he means business.  He is willing to work with dangerous people to get what he wants. He technically ruined the lives of both Gamora and Nebula. And I don’t underestimate the amount of damage Thanos could do with a loaded Infinity Gauntlet. But most of what we know about Thanos in the MCU is by reputation. 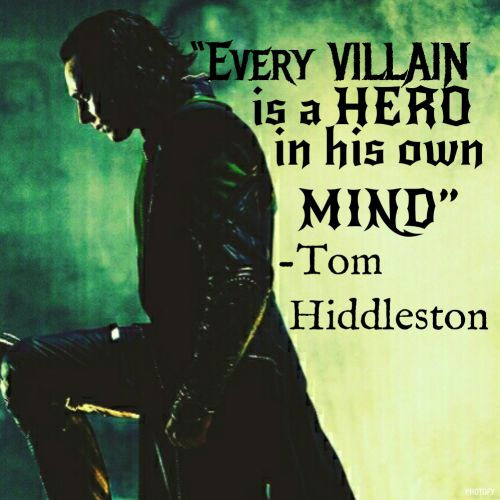 Now Loki…I see him as kind of an antihero. He’s willing to do some pretty evil stuff to get what he wants, but judging from the trailers for Thor: Ragnarok Marvel might not be taking him in the direction of straight-up bad guy. There is still some genuine affection, I think, for Thor, and it’s too soon to say that he’s been a complete tyrant on Asgard. I don’t buy the theory that he was brainwashed/controlled by Thanos for an instant. But, like some villains—and like most everyone in the MCU—Loki has been through extreme emotional duress.

Mordo in Doctor Strange had a fantastic arc. He was set up as someone with a painful past and a certain way of thinking who is likely to come back on a specific ideological mission. That’s enough to whet my appetite for a Doctor Strange sequel. But in the meantime, I’m kind of ticked off that he’s not going to be in Infinity War. Yes, this movie is already crowded with characters, but you’d think that someone who had an actual fleshed-out story arc would made better competition for the Avengers than Thanos. Or a better ally for Thanos than Loki (who may have had his own agenda) or Ronan (who ultimately turned on Thanos). Just saying.

The best villain in the Marvel Cinematic Universe to date is Helmut Zemo. Hands down. He succeeded in destroying the Avengers where Loki and Ultron both failed. Simply by exploiting the emotional weaknesses of Captain America and Iron Man. He figured out that the only way anyone could destroy the Avengers was to get them to destroy each other—they are so powerful that no one on the outside stood a chance. 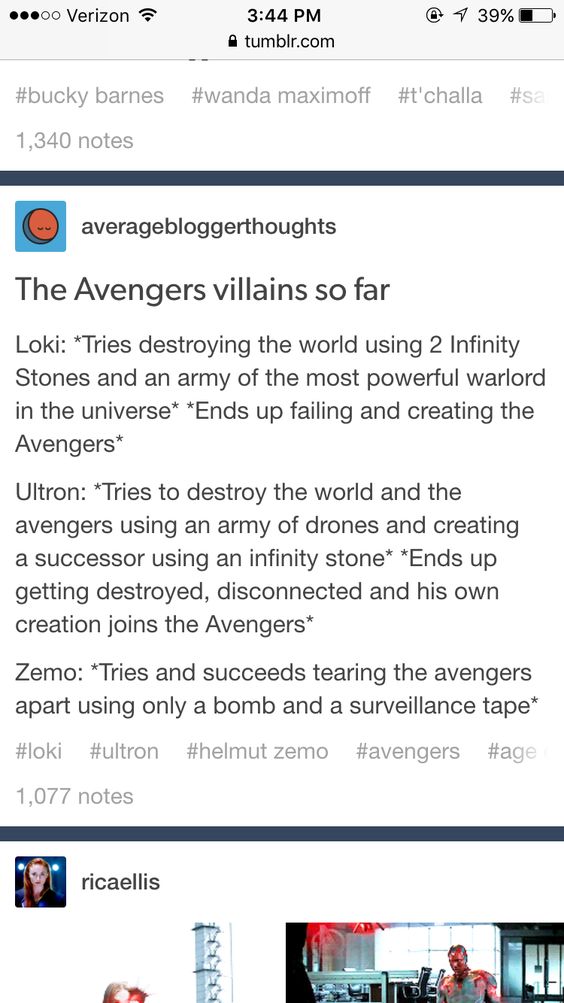 Zemo’s evil schemes haven’t blown up in his face…yet. Pinterest

Zemo differs from other MCU villains to date because he’s a mere mortal.  He doesn’t have a cool outfit or a super-army or an elaborate plot to destroy the world. No fancy weapons besides a bomb he uses in Berlin to turn off the lights for a few minutes. He’s angry and hurt but he doesn’t display his feelings by his clothes or his tactics. No, he just wants revenge for the deaths of his family. And access to some very deadly secrets. He makes everyone else act out the drama they’re under. He just watches those other people suffer and walks away. And no one passing him in the street would think he was different from an ordinary person.

Yes, the rest of the world wants retribution for the havoc that Ultron created in Sokovia, they want the Avengers to be held “accountable”, but Zemo wants them off the map completely. He actually does something to make the Avengers pay. And he has the guts to murder a lot of innocent people—in Vienna and Berlin—to manipulate them into fighting each other. You have to give Zemo credit for coming up with that kind of a plan—you have to respect him. Loki and Ultron just wanted to send their super-armies to kill people and hope the Avengers were overwhelmed. Zemo was, in a lot of ways, a lot more subtle. That’s why they didn’t see him coming.  Zemo’s worst crime is Hawthorne’s Unpardonable sin: manipulation of another person’s will.

You want to be a supervillain on my love to hate list? Hurt Bucky.

I really wanted Zemo to be in Infinity War—in fact I was kind of led into thinking that he would be part of it. Imagine, if you will, a subplot of Infinity War where Helmut Zemo escapes prison, maybe with the help of Mordo. They decide to destroy the world. They make contact with Thanos and forge some sort of an alliance. Steve Rogers and his allies are trying to stop them while Tony Stark has to deal with Thanos. I can’t believe Marvel passed that up. 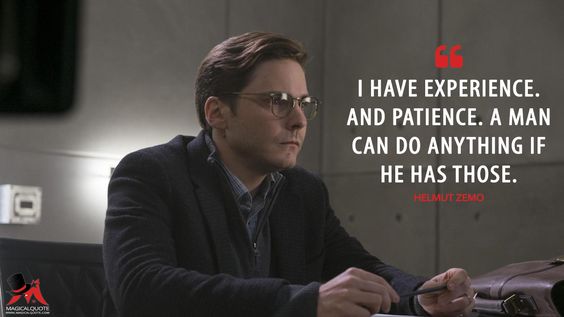 With the deaths of Zola, Pierce, Strucker, and Rumlow/Crossbones, I think Marvel is trying to move away from having Hydra as an antagonist organization. And some of Zemo’s dialogue in Civil War hinted that he’s not interested in carrying on Hydra. In fact, once he’d taken care of Iron Man and Cap, he was planning to shoot himself. With his family gone, what does he have to live for?

This is why I thought Zemo would have been a great supporting villain in Infinity War. If Thanos wants to destroy the Avengers, he could ask Zemo for help. Loki and Ultron attempted to emotionally sabotage the Avengers, but Zemo made them reach the breaking point, with the added bonus of turning several of them into outlaws. Zemo was more or less satisfied that Stark and Cap went their separate ways at the end of Civil War, but Thanos offering him a chance to kill them might be incentive to cooperate. Though I am of fan of ‘let the punishment fit the crime,’ do you really expect the CIA to keep Zemo in that containment cell for the next 2-3 years if they bring him back at all?

And if the Avengers are back together in any way after Infinity War/Avengers 4, Zemo probably won’t be very happy that all of his hard work has been undone.

Thanks to Zemo, Marvel has the chance to tell some interesting stories after Infinity War. You see, in the comics, when Bucky became Captain America, Zemo was one of his antagonists. Bucky’s history as the Winter Soldier was integral to Zemo’s plot to destroy the Avengers in Captain America: Civil War. And not to mention, in the scene where Zemo poses for the CIA psychiatrist, Bucky kind of gives him attitude. Granted, it’s nothing personal against Zemo at the time—he just wants to be left the heck alone—but Zemo gets under his skin before he even triggers him. So if they’re both somehow around after Thanos has come and gone—you see where I’m going with this, right?

Phase 4: BuckyCap versus Zemo. Either a stand-alone movie, or, if Natasha Romanoff is involved, the plot of the Black Widow movie we really want. Natasha somehow decides to take Zemo on her own and gets Bucky’s help, they fall in love just like in the comics, did I mention that I’m a huge BuckyNat shipper? 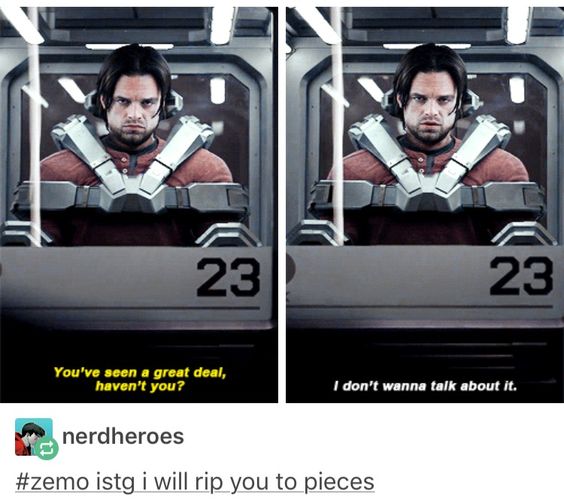 Some people in the fandom think Bucky is too damaged to take on being Captain America in the MCU. But I want to see him do it. More relevantly, I want to see Bucky become Captain America and go from being Zemo’s pawn to his rival, the person who stands up to him. Just imagine how TICKED Zemo would be by that—that the mantle of Captain America had not only survived but was being carried by someone who he had used to destroy the last one! Marvel doesn’t necessarily have to go the BuckyCap route, but Bucky has picked up the shield at least once in each Captain America movie. It would be kind of annoying at this point if that didn’t happen. The point is, however, that Bucky versus Zemo would be an awesome story to watch in the MCU.

A villain is someone who intentionally makes the wrong choices even when he’s given the opportunity to do right. Zemo chose to cope with the deaths of his family by going after the people who “caused” the disaster that killed them. Furthermore, he had no regard for the human lives he had to take just to manipulate two emotionally vulnerable people into fighting each other. But unlike other typical supervillains, he does it without pizzazz or drawing attention. He just likes to do bad things. Maybe he could become more of a traditional supervillain in later film installments but if I don’t really want him to lose what makes him special: his cold, calculating mind. Zemo isn’t my favorite villain, and he’s not the one I hate the most either. But he is, objectively speaking, the BEST. If Marvel wants to focus on Thanos for Infinity War/Avengers 4, fine with me. But if Marvel does not develop Zemo further after Infinity War, they are missing a huge opportunity.