I admit, sometimes I get a little annoyed with Han Solo because he’s over-hyped, he’s the favorite character, he’s the reason a lot of people enjoy Star Wars (and if Harrison Ford has the same irritation with the fans, then that would explain a few things). He’s not the main reason I love Star Wars, but he’s one of the reasons I’ve enjoyed those films so much over the years. Mostly because of his weird sense of humor.  Here is a short list of my favorite Han Solo moments in the Star Wars original trilogy and The Force Awakens.

Let’s do my favorite one first so I can save some excitement for the rest. I already covered it in my Han x Leia post but I get such a huge kick out of it. This is supposed to be kind of a serious moment between Han and Leia. But the look on Han’s face…for once in his life, Han Solo doesn’t have a witty comeback. In all seriousness: this is the last really big funny moment of Return of the Jedi, before the Ewok celebration. Right before then, we watched the nail-biting conclusion of the battle of Endor and witnessed the deaths of Darth Vader/Anakin Skywalker and the Emperor. The last half-hour or so has been an emotional roller coaster. But the moment kind of loosens the tension for the audience and helps set the tone for the finale: Luke and Leia may have lost their father, but Han is welcome to be part of their family. There are a lot of reasons for all three of them to be happy. But, still, that’s not quite the answer that Han was expecting to hear about Leia’s feelings for Luke.

There are a lot of moments in pop culture with the character says “I got this” one moment and “JK I don’t” the next. Han Solo has several of these. One of my all-time favorites has been when Han Solo just goes on a stormtrooper-shooting spree on the Death Star and leaves Luke and Leia to find their own way back to the Millennium Falcon. He gives a death-or-glory yell as he runs around the corridor, and then he hits a dead end and, realizing his error, starts running the other direction. Hilarious.

This is the only bullet point where I’m intentionally discussing character development. Since Luke and Obi-wan met Han at the Cantina in Mos Eisley he was set up as a lone wolf, a rogue, someone who didn’t shy away from bending or breaking the rules. He didn’t care about doing the right thing: his only real motivation was getting money. Luke only managed to convince him to help rescue Leia by suggesting that there might potentially be a reward for doing so. But Han didn’t plan to stick around after he dropped them off at Yavin. He wasn’t going to be there for Luke and Leia or fight in the rebellion. This was just a job. He wasn’t planning on getting sidetracked. But then right before the battle, Luke confronts him. You’re a great pilot, the Rebellion needs you, we just got out of the Death Star with our lives, you can help us fight the Empire. Yadda Yadda. I don’t blame Luke for thinking that Han should stick around, because they just had a traumatic escape together. Luke kinda burns him for being selfish, but Leia has a point: it’s up to Han to choose what he wants. And then through the whole battle of Yavin, the tension builds and builds as the rebel pilots are picked off one by one. Luke is the last one in the trench with nothing but the Force he’s just barely learning to use. He’s got Darth Vader and two other TIE fighters right on his tail. And then, out of nowhere–PEW PEW! YEAAAHOO! “You’re all clear kid! Let’s blast this thing and go home.” The TIE fighters are gone and Luke gets that shot down the exhaust port.

And if it wasn’t for Han, neither Luke nor Vader would have lived to have that moment.

Han Solo had so many good moments in TFA. “That’s not how the Force works” kind of gets more of the attention, but my favorite Han scene is when he’s talking to Finn right after they land on Takodona. Finn tries to pass himself off to Han as “a Big Deal in the Resistance.” But Han immediately calls him out. “Listen here, Big Deal, you’ve got a bigger problem: women always find out the truth.” The last six words point out a lot about Han’s character. For one thing, he’s been with Leia on and off for the last thirty years and she never took any crap from him, and he doesn’t think it’s smart of Finn to try that on Rey. Second of all, Han knows that Finn does NOT, in fact, work for the Resistance. Rey may be tough, but she’s young and very trusting. Han is a smuggler and a professional liar. He can tell when someone else is trying to trick him. Han might not know all of Finn’s backstory but he does know that Finn is a noob. Rey is, too, but unlike Finn, Rey has Han’s respect.

On the run from the Empire, Han and Company are just coming out of the asteroids, and he’s hoping the hyperdrive on the Falcon is finally fixed…and it’s not.

Shelter from the Storm

And then Lando says the same thing when they’re escaping from Bespin.

Now, through all of these favorite Han Solo moments, you may be noticing a common thread: His facial expressions are just golden.  It’s just so good at conveying whatever he’s feeling at the moment: irritation, smugness, disbelief, mild panic, anger. Lots of great feelings. Apart from Obi-wan Kenobi, Han Solo is the most DONE character in the Star Wars universe. Especially by Episode VII. But I digress. 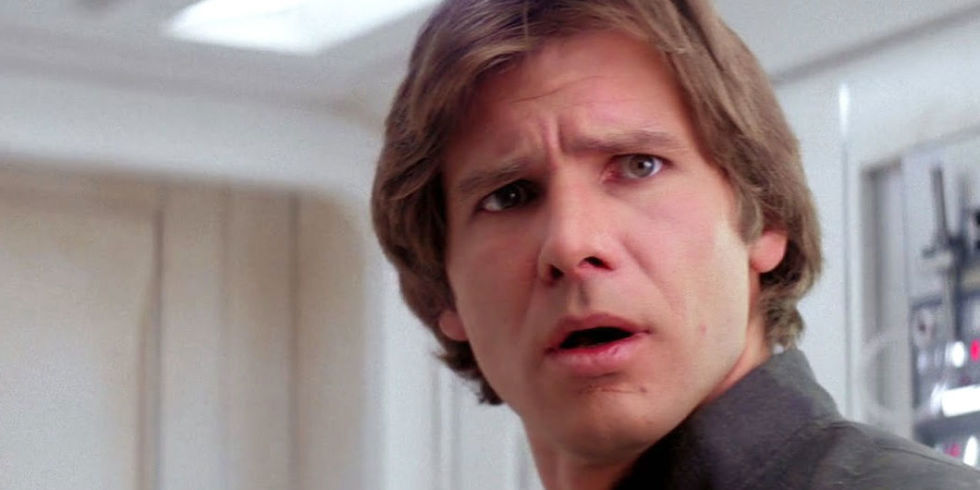 I don’t know what it is about what it is about Harrison Ford as Han Solo, I’ve hardly seen any of his other films but he just makes the darndest faces. Half the character is in the facial expressions.

Luke and Han are incognito on the Death Star. Luke goes down the cell bay to rescue the princess. Han…answers the beeping com on the control console. Granted, they just shot a lot of people to break in there and not quite able to relax yet. But still, Han Solo is supposed to be a pretty smart guy—I guess not so much right in the middle of a fight. What was he thinking?

Han Solo even gets done with himself sometimes.

I mentioned it earlier, but I feel like it kind of gets overlooked as far as comedic value. We’re halfway through A New Hope, Han Solo has already had a heck of a day, his destination planet was blown up, then his ship got caught in the Death Star tractor beam and now they’re in a control booth hiding, him and Luke wearing Stormtrooper armor. Han isn’t too excited to sit and wait around for Obi-wan to fix the tractor beam. But when Luke and the droids discover that Princess Leia is being imprisoned on the Death Star, he tries to convince Han to help him go rescue her. Luke doesn’t even hesitate on wanting to save the princess. But Han isn’t so keen. Luke tries to appeal to his boredom (“Barging off to the detention area isn’t what I had in mind!”) and Han’s sense of right and wrong (“But they’re gonna kill her!” “Better her than me!”).

Going into the Death Star to rescue the princesa is really a dumb idea, but Luke cares about her enough to want to do something to help her. Help her, you indirectly help destroy the Empire, besides she was hoping to see Obi-wan anyway. But Han Solo doesn’t care. Saving the princess is just another one of those weird Luke things, like him learning to be a Jedi. He doesn’t care that Leia lives or dies. She’s not relevant to his interests.

But then Luke convinces Han to come along by speaking his language. Han Solo is the man in it for the money. It’s either the oldest trope in the book or Han is one of the people who wrote it.

Han Solo really has to put up with a lot of crap in Return of the Jedi. It brings out his best humor, however.

On the forest moon of Endor, Chewie springs a trap rigged by cannibal teddy bears, and Han, Luke, Chewie, 3P0, and R2-D2 spend a few minutes dangling from a tree, and then reach the ground only to be apprehended by the hostile natives. Really helpful, when you’re trying to destroy the Empire. And then C-3P0 announces that the Ewoks think he’s a god. Han is SO DONE. 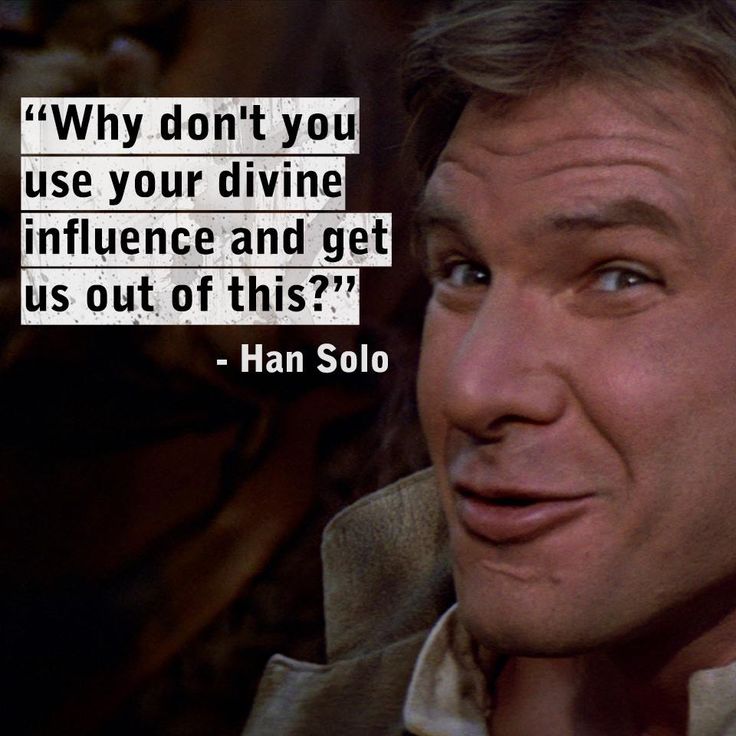 Just stare at it for five seconds: Check out Luke in the background:

Han Solo is one of the reasons that Star Wars is such a rich and powerful story. He has a selfish streak, but in a pinch he’s willing to do the right thing for the people he cares about. Am  I excited for the Han Solo spinoff movie coming next year? Yes. But that’s another blog post.