When people ask what the difference is between Salt Lake Comic Con and its FanX event, the only real answer you can give is the size.  Part of the Salt Palace space is closed off and so there are much fewer artists and vendors.  There are also fewer attendees, so when it comes to fighting crowds it’s much less of a hassle. There aren’t any huge lines waiting outside of the main ballroom to get into the celebrity panels, but I still took precautions in case there were. For instance, I stayed after the Jason Isaacs panel to make sure I had a spot for Jeremy Renner.  However, I was cocky enough to try and find a better seat for Renner, but I ended up with a worse spot than before and the camera guy was directly in my line of sight.  So that was my own fault.

I also got to be one of the people asking questions for the LeVar Burton and Peter Facinelli panels.  I feel like I could have asked much better questions for both of them, and I feel like celebrity guests in general sometimes don’t directly answer people’s questions, but it was still cool to meet them.  LeVar Burton especially was a real treat to interact with.  I grew up watching Reading Rainbow, and course my mom is a huge Star Trek: The Next Generation fan so I was familiar with his role as Geordi LaForge. But can I just say it broke my heart a little to see how much gray hair he has?

I was hoping to hear more about Supergirl from Facinelli but the panel ended up being mostly about Twilight. And it’s just hard to ask questions about Supergirl without pushing into spoiler territory. But it was still cool to learn more about him and his career as an actor. 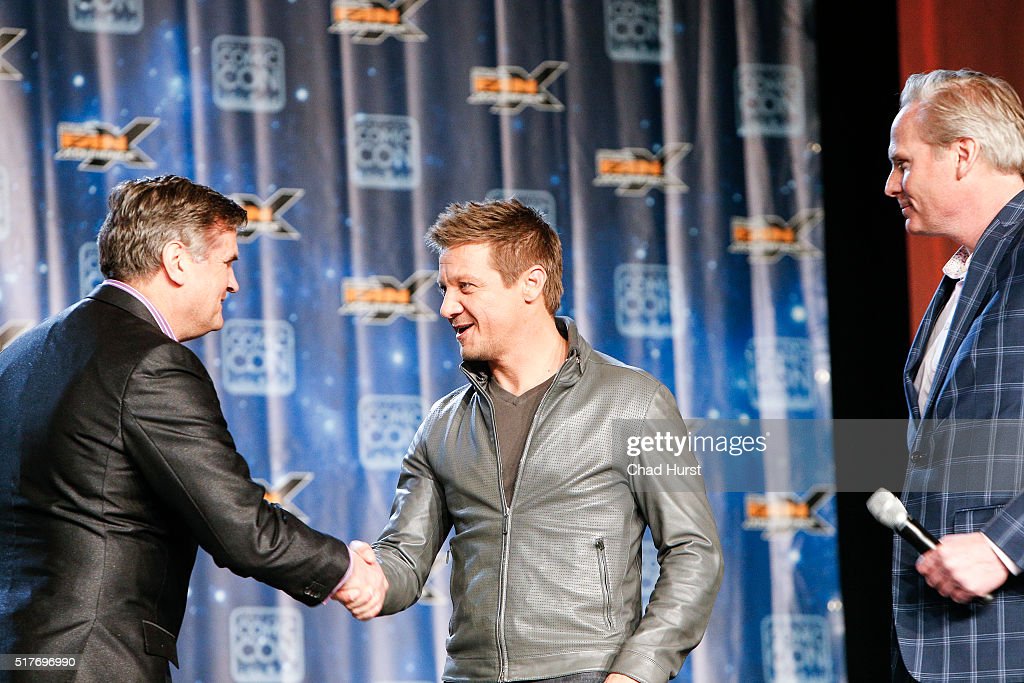 Aside from not being able to directly see the one and only Jeremy Renner while he was on stage his panel was still fun. Compared to his Marvel co-stars who were here in September, though, he gave off the vibe that he is not as involved or interested in the movie universe.  He did mention that his role in Civil War feels more like a cameo. There were a few fun moments but it wasn’t nearly as memorable.  I think maybe everything seems anti-climactic after last September.  It would still be nice if Renner came back.

I was late for the panels for both Alan Tudyk and Jason Isaacs, but given the choice I wish I had been on time for Isaacs, that was a fun panel.  He talked about getting into character for Lucius Malfoy and how some of the Dobby effects in Chamber of Secrets were his improvisation.

I was able to attend a handful of smaller panels this time around, and most of these were fun.  I went to both of the Captain America panels, including the Getting Ready for Civil War panel on Friday night.  Most of the speculation at the Civil War panel focused on Steve, the next Captain America, Spider-man, and Black Panther, which isn’t surprising, but I wish they’d talked about the other characters a little more.  Thankfully they didn’t talk about any spoilers I hadn’t already heard about. I went to two creative writing panels (three if you include the one on fanfiction) and the psychology of Star Wars panel.  It’s great that The Force Awakens has already come out and that we have material from the film to dissect and talk about. The smaller panels are fun because it’s a smaller setting (well, unless it’s a hot topic like Civil War) and we can hear about and talk back about our similar interests.  I wish I had like three bodies or a time turner so I could have attended more, there are always so many interesting topics to learn more about.  It’s a good thing that some of these panels are held every convention.

I’ve been to four of Salt Lake Comic Con’s events now.  Every convention has been different, and every convention there are different things that have gone smoother for me or been the focus of my attention.  This FanX I think the focus was on cosplay.  There are always great cosplays to see, but this time around I was able to capture a lot of great photos.  One trend I particularly noticed were a lot of little kids in really well-done costumes. I did take a few minutes to browse the vendors.  There were a handful I recognized from past conventions (which tells you how often I’ve been to these cons).  I bought a pretty awesome Supergirl poster.

In case you missed it, Thursday night there was a Star Wars flash mob/lightsaber battle in the north foyer put on by the Wasatch Saber Club.  Several of my friends from Kid’s Heroes are in the club and two of them even had a duel.  There was also a pretty good Kylo Ren vs. Rey duel near the end. Here’s a video of the full battle: https://www.youtube.com/watch?v=k7MXASy_6OI&index=3&list=WL I had such a great time cosplaying this con. Of course, any day that I get to be Scarlet Witch is a good day. I’ve figured out to tell people that to take a photo on my phone you should tap the camera icon. I have mastered the art of taking funny photos. My debut cosplay, Mira Nova from Buzz Lightyear of Star Command, was a success as far as being able to stay in face paint and a wig for upwards of twelve hours. I could probably count on one hand the number of people who knew what character I was, but that’s okay. I had a lot of little girls ask to take pictures with me simply because I was a princess. I’m not sure if I would wear that costume to a convention again, but it was a good experience just to be that character for a day, and hang out with other Disney princesses! Also, I got to give a Tangean brain squeeze to Deadpool and Kylo Ren. Thursday and Saturday I volunteered at the Kids’ Heroes Foundation booth. This was my third event with the organization.  I still have a lot to learn about working with kids but doing the booth was fun as well as a good experience. Not a lot of people asked to take pictures of me specifically as Scarlet Witch or Princess Leia, but I remember on Thursday there was a little girl who was feeling shy and her mother had to ask me for her.  Well, in situations like these I think of the Starfish analogy: if I made a difference for that one person, it was worth it. Overall, conventions are just stressful to attend because you have a lot of expectations and a lot more disappointments.  You have fun but at the same time you can’t wait for it to be over.  A convention is the most fun, however, when you’re in the moment and you’re enjoying what you’re doing, and I had quite a few of those.  *Sigh* On to next September, I guess.