As I mentioned in my Willow post last week, there is a special flavor with relationships that start out with the two lovebirds hating each other’s guts. Few classic love stories in that category are as popular or well-loved as the romance of Han Solo and Princess Leia. And I personally find their relationship very entertaining. No, seriously: just because I like the Prequels doesn’t mean that I don’t appreciate the Original Trilogy. Far from that. And since this year marks the 40th anniversary of the movie where Han and Leia met, how more appropriate to celebrate this Valentines’ day (belatedly) with a blog post in their honor, to shower their ship with praise and brutal analysis and feels.

“This is some rescue!”

Leia meets Han in the firefight in the detention block corridor and it’s SO DONE AT FIRST SIGHT.

“Looks like you’ve managed to cut off our only escape route.”

“Maybe you’d like to be back in your cell, your highness.”

The two guys who came to rescue her—they don’t have a plan for getting out. They don’t have backup. They’re all gonna get killed if they don’t do something fast. Leia is just irritated. But luckily, she notices Han standing in front of the garbage chute.

“She’s a wonderful girl,” Han tells Luke, the farm boy who talked him into going to the detention block to rescue the princess. “Either I’m beginning to like her or I’m gonna kill her.”

“I don’t know who you are or where you’re from, but from now on, you do as I tell you.”

“No reward is worth this.”

They get out of the Death Star all right. But Han makes it clear to Leia in the cockpit of the Millennium Falcon that he’s not going to stick around.

“I ain’t in this for your revolution, sister, and I’m not in it for you, Princess. I expect to be well paid. I’m in it for the money.”

“You needn’t worry about your reward. If money is all that you love, then that is what you’ll receive.”

Han thinks she’s cute, even though she gets under his skin. But Luke tells him to not get his hopes up.

Leia isn’t too disappointed that Han decides to leave after dropping her off on Yavin-4. But when he comes back to help Luke blow up the Death Star, she realizes that Han Solo is actually not that bad of a guy. Han, Luke, and Leia leave the hangar at the rebel base the best of friends.

But then Han suggests that there’s another reason he wants her to stay.

He flirts with her after rescuing Luke.

“Why you—stuck-up—half-witted—scruffy-looking—NERF HERDER!” And then she snogs Luke. Clearly, Han needs to up his game. In spite of all the difficulty she is giving him, Han cares enough about Leia to get her out of the rebel base with her on the Falcon. And while they’re lost in space, Han makes a move. Leia, of course, takes time to consider her feelings. She realizes that she does, in fact, have a mutual attraction to Han. By the time they get to Bespin, she’s warmed up enough to show him some affection. When it looks like she’s about to lose him forever, she lets him know.

Leia watching Han go onto carbonite is gut-wrenching to watch. Every time.

“Someone Who Loves You”

Their reunion in Jabba’s palace is an underrated moment, in my opinion. She loved him enough to risk getting caught–and she was caught. And they escaped together.

I also like how Han and Leia have each other’s back on Endor. #RelationshipGoals

Now, at the same time, Luke has made the startling discovery that Leia is actually his long-lost twin sister. Of course they’re already good friends, and he seems to already be cool with Han and Leia being together anyway. However, Han Solo HAS NO FRICKING IDEA AND IT’S HILARIOUS.

“I thought she was with you.”

Finding out the truth from Luke is painful for Leia. It’s good to know that at least she has someone in her birth family out there to love her, but he has to go and confront their dysfunctional father. Not what she wanted. And Han isn’t too keen about the fact that she doesn’t want to talk about it. But he’s not the same guy who rescued her from the first Death Star. Not by a long shot. He loves her. Truly. Because he wants her to be happy.

My favorite Han and Leia moment is when, after all is said and done, she tells him what’s really going on with Luke. Congratulations, you weirdo. He’s NOT the competition! You get to marry Leia, Luke Skywalker is effectively your brother-in-law. Oh, and by the way, her dad: he’s the guy who put you on carbon-freeze. Han knows Leia well enough to know that she isn’t anything like her biological father. Yub Nub!

“You still drive me crazy”

I’m sure this notion bursts the bubble of a few old-time fans who like to put the original trilogy and the old EU on a pedestal, but Han and Leia didn’t have a perfect relationship. And they weren’t perfect parents, either. Their estrangement in The Force Awakens attests to that. Before then, as we read in Bloodline, Han spent the years following the Galactic Civil War doing spaceship races (and, to quote a popular Broadway musical, “encouraging young things to grow”). Leia was serving in the Galactic Senate. They sent their son Ben off to train as a Jedi with Luke, partly because neither of them could deal with a child who was so powerful in the Force–as Han put it, there was “too much Vader in him.” It doesn’t seem like Ben felt like his parents loved him enough. According to Bloodline, Leia never told Ben who is grandfather was–where his exceptional abilities with the Force came from. And he didn’t find out from her. Ben–as Kylo Ren–idolized his maternal grandfather and his Force abilities, and for that reason didn’t think highly of his dad to start with. Having his father absent for part of his childhood and then being sent away did anything but help those feelings. That doesn’t change the fact that he loved his father enough to admit he was being torn apart between the Dark and the Light.

But Han and Leia, much as their son may have needed them, weren’t the stay-at-home parents type. Han started out as a smuggler, he became a war hero, he did racing and coached other pilots. Leia was raised from her cradle to be a politician and a warrior. Her birth mother and both of her adoptive parents were politicians. 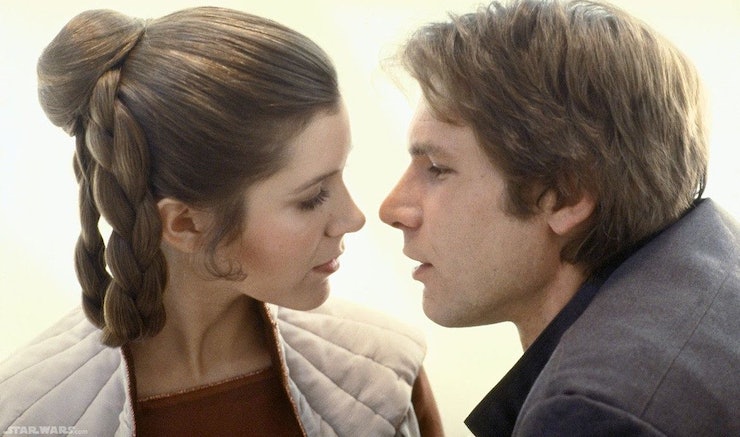 But that’s not saying that Anakin and Padme had a functional relationship either—different set of issues, but similar results. *Sigh* Does anybody in this family ever get their act together? In this whole stupid galaxy?

“You know, no matter how much we fought, I’ve always hated watching you leave.”

They still love each other a little bit after everything they’ve been through. And it still hurts Leia when she senses Han’s death. I never had more serious Han and Leia feels than while watching The Force Awakens. I’m not as passionate about Han and Leia as I am about other couples. But from start to finish, they are fun to watch. Their fiery tempers both drew them together and pulled them apart. They complete each other even if they’re not perfect. Han Solo and Princess Leia made each other better people, and that is the kind of love story that anyone should work for.

(And seriously, if you like Han and Leia’s relationship and you haven’t read Bloodline you’re missing out.)

One thought on “Han and Leia: Remember When”