A little over a year ago I had a job working at a furniture store.  Guardians of the Galaxy had just come out on Blu-ray and it played on repeat on several of the display television screens, including one that was close to the area where I worked. In spite of not being able to hear the dialogue very well, I became very acquainted with the different parts of the story and the struggles of the central characters.

The first few times watching Guardians it’s easy to see that dealing with grief is a characteristic of Star-lord, Drax, and Rocket.  However, Gamora only reveals her backstory in a few quiet lines spoken to Peter Quill while the others are in the bar on Knowhere.

“When Thanos took my homeworld, he killed my parents in front of me. He tortured me and turned me into a weapon.  When he said he was going to destroy an entire planet for Ronan, I couldn’t stand by.”

Gamora, I argue, is the most important character in Guardians of the Galaxy.  True, Star-lord gets all the attention, but he only joins forces with Gamora at first for his own monetary interest.  Gamora is trying to do the right thing from the start. The plot of the film revolves around her efforts to keep the orb away from Ronan. 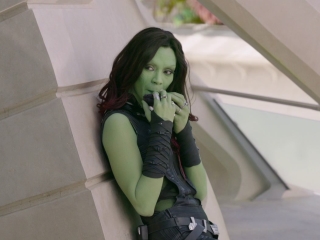 What makes Gamora remarkable is the opposition she is facing from her adopted “family.”  Thanos murdering her biological parents and her people must have been terrible.  Giving her physical enhancements and training her to fight and kill borders on abuse.  Yet Gamora wasn’t the only one–Thanos also did this to Nebula and I imagine he has other “children” that he has enlisted in his service. I’m not sure how much like an actual family Thanos and his children were, but I heard somewhere that in the comics Gamora warmed up to Thanos and returned his fatherly affections, and in the film Thanos refers to Gamora as his favorite.

In any case, the consequences of betraying the Mad Titan would be severe. It must have taken an enormous amount of courage to decide to stand up to him.  In the film, Thanos accuses Ronan of alienating Gamora from him–well, Ronan is a jerk, so no surprises there. But Gamora chooses to do the right thing and does not ever second-guess her intentions. In spite of her sexy-alien appearance and hardcore fighting skills, is one of the most courageous characters in the Marvel Cinematic Universe.

Of course, doing the right thing is never easy, and having to ask for help from the likes of Peter Quill and Rocket tests the limits of her patience.  Trapped in the prison watchtower with them, Drax, and Groot, she mutters, “I am going to die surrounded by the biggest idiots in the galaxy.” She got that far in her plan to betray Thanos and Ronan and it looks like it’s going to come to nothing.  After the fiasco on Knowhere, however, she decides to put her faith in the guys. “I have lived most of my life surrounded by my enemies.  I will be grateful to die among my friends.”

My favorite Gamora fight scene is when she is fighting Star-lord and Rocket on Xandar.  The choreography in that sequence is amazing. My favorite scene with Gamora period, is the scene in the Kyln when she goes to sit alone in her cell.  She is the most hated person in that prison, and the other inmates crowd outside of her cell to jeer at her, but she doesn’t look ahead.  To quote The Princess Diaries, “Courage is not the absence of fear, but the acknowledgment that something else is more important than fear.” Gamora embodies this ideal.

Guardians of the Galaxy Volume 2 is currently filming.  While reportedly the sequel will revolve around Star-lord discovering the identity his father, I look forward to seeing more of Gamora in action.

Someone from Blastr Agreed with Me