We’ve have a few months to marinate. The hype and overreactions are over. We’ve had a little while to step back and evaluate Captain America: Civil War. The spoilers are out. So what comes next? It concluded the Captain America trilogy, but the story of Steve Rogers–the man who carried the mantle of Captain America–is far from over. Some of the ideas I will be sharing are things I heard at two Captain America panels at Salt Lake Comic Con FanX back in March.

“You didn’t see that coming” is an understatement. Steve DROPPED the shield at Iron Man’s feet. For all intents and purposes, Captain America is dead. But Steve Rogers isn’t. How does this make sense?

To begin with, Captain America was the persona of government interests. Steve Rogers has fought against that role every step of the way. In The First Avenger, Steve rejected being the chorus girl and took up the role of a soldier–of a captain and a leader, a hero, someone who does what needs to be done. And he did it to fight against evil. The Avengers saw him in a time and place where he wasn’t comfortable, and yet he took up the role of a leader in this new setting to unite a disparate team against a serious threat. In The Winter Soldier, Steve reasserted the role of Captain America as a figure that fights for the right and not for the system. Age of Ultron, Steve’s accepted that his place was to continue to lead the Avengers. But in Civil War, the world’s governments decided that the Avengers needed to be held responsible for their actions–or, in other words, only act as they were directed. Steve felt like he could not expect a higher authority to protect the world the way he felt it needed to be. Dropping the shield was making the statement that he did not want to be used by anyone else.

If you remember back to the night before Steve received the serum, Doctor Erskine made him promise that, no matter what the result of the experiment was, he would be true to himself–not a perfect soldier, but a good man. Steve dropping the shield at Tony’s feet was his way of keeping that promise. A soldier follows orders. The world wanted Captain America to be the perfect soldier. But Steve wasn’t going to take orders from them anymore, not when they were asking him to do something wrong. It was more important to him to be a good person.

But is Steve done being Captain America for good? In the comics, he has retired repeatedly only to return to the role when other superheroes could not make up for his absence. It is not entirely impossible, given what was hinted at the end of Civil War, that he could be continuing to be a superhero but under a different name or no name at all. In the comics, Steve Rogers was also The Nomad and the Captain. He could probably be in a similar position by the time of Infinity War. He might never be Captain America again, whether or not he dies. But extreme circumstances and a need for leadership in Infinity War might convince Steve to take it up again.

Marvel might decide to not replace Steve as Captain America at all or have him return to that role. In the comics, the role of Captain America has been filled in by other characters, but anyone else who has taken that mantle has had to live up to the ideal set by Steve Rogers–and it’s been a burden. Whoever becomes Cap next in the MCU will take a different approach to getting things done, but they will still fall short. With that in mind, let me evaluate the two most likely candidates. Someone at FanX made the statement that having Sam Wilson becoming Captain America in the MCU would be better marketing for Marvel. While for me the notion borders on heretical, there are valid reasons for Marvel to go that route, most notably that FalconCap has been successful in the comics. Changing the race and gender for characters is a good way to keep stories up-to-date and relevant to the audience.

There is also the argument that Sam Wilson is a much better established character in the MCU than the other candidate, Bucky Barnes. As far as screentime and speaking roles, this is absolutely true. In addition to being in Civil War and The Winter Soldier, Wilson also made cameo appearances in Age of Ultron and Ant-Man. After escaping prison at the end of Civil War, Sam Wilson is a wanted criminal, but a thousand percent less of a wanted criminal than Bucky is. It would be easy for him to get his record expunged and earn the public trust as Captain America. Sad but true, Steve currently has a much better working relationship with Sam than with Bucky. EVERYONE has a much better working relationship with Sam.

And after all, he got Bucky to move, didn’t he?

But aside from all that, I don’t think Sam should become Captain America–not right away. Sam Wilson does not have nearly the emotional weight for the fans that Bucky does. We have had glimpses at Sam’s backstory but I think his character needs more onscreen development. We don’t know nearly as much about his motivations as Steve’s or Bucky’s. Aside from a really awesome deleted shot for Civil War that I heard about there is no precedent in the MCU for Sam to become Cap. Of course, that could change drastically in Infinity War. Or before Infinity War. What if Infinity War opens with Falcon as Cap and Steve managing a Secret Avengers team from behind the scenes? You never know.

Bucky’s emotional and external conflict at the end of Civil War begs the question: if he becomes Captain America in Steve’s place in the MCU, how will it happen? He struggles with literally everything, but most of all guilt and having to live with the fact that he used to be the bad guy. He has more crap to avenge than all the Avengers put together, but he doesn’t want revenge. Heck, being the target of a revenge plot has probably changed his mind about that. But more than anything Bucky wants to be a good person. He knows that he’s still vulnerable to Hydra’s brainwashing. Unless he can find a way to get it fixed, he just wants out of the picture. He doesn’t want to hurt anybody on his side, and the bad guys will just hurt him back. He wants to be left alone because it’s the best thing–what was it he said in the mid-credit scene? “It’s the best thing for everybody.”

Well, just to drive the point home, Bucky Barnes is a good person. Without a doubt. He doesn’t want to be a hero, but the fangirls point out that he’s one without even trying. Like I said for Steve and Sam however, everything could change in Infinity War. The Russo brothers have stated that Steve and Bucky’s relationship will be explored further in future films. Bucky becoming Captain America could be part of that. I am anxious to see what would motivate him to take up the shield. It could depend on what gets him to get off of the cyro in Wakanda in the first place and how he deals with his past. We know in Civil War that Stark has some interesting tech that can help with traumatic memories but a) the Winter Soldier killed Stark’s parents, b) Tony and Steve are going to need more time to reconcile, and c) we don’t know IF that will be enough to help Bucky with what he’s been through. And another thing to consider is Zemo. Zemo was one of Bucky’s enemies when Bucky was Cap. There may still be some unresolved issues with their cinematic relationship. If Zemo is sticking around for Infinity War as well, that could compel Bucky to get involved. If anything, he would see accepting the role of Captain America as the best thing to do for himself and everyone else around him.

As far as fan interest, the Winter Soldier comic line had a huge fanbase, and Bucky’s time as Cap in the comics has been described as some of the best Captain America comics ever written. As for the MCU fanbase, well…we’re all mad here 😉 According to the experts, Bucky becoming Captain America would open up huge story opportunities in the MCU.  It would certainly add depth to an already complicated and compelling character. It’s been hinted at in all three films. The smoking gun, of course, is Sebastian Stan’s 9-movie contract. He’s down to six. Marvel Studios might have big plans for Bucky after Infinity War.

My personal opinion is that Bucky still needs some time to sort out his issues and to develop after being the Winter Soldier. I don’t think he’s quite ready to be Captain America yet. But it is going to happen. Soon. 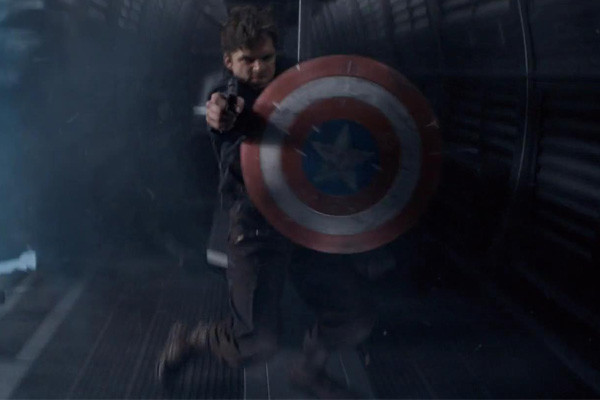 Salt Lake Comic Con got on the map last September when Chris Evans, Anthony Mackie, Sebastian Stan, and Hayley Atwell made appearances and talked about their characters to very eager audiences. What sticks out in my mind is that Mackie said that neither Bucky nor Sam need to become Captain America. Sebastian, on the other hand, said he would be up for it if the fans wanted it. The comment was greeted with thunderous applause. At FanX back in March, a good number of Salt Lake fans were still in favor of BuckyCap. A few fans on Tumblr want all three of them. Captain America: Civil War brought up more questions about the futures of Steve, Bucky, and Sam than it answered.  Anyone can be Captain America, but the truth of the matter is no one can do it the way Steve Rogers does.

2 thoughts on “The Future of Captain America”