I wouldn’t really say there are spoilers in this review, but I do discuss some of the highlights of the film openly rather than the ending or what happens to people. So sit tight.

A Strange Place in the MCU

I went to the Salt Lake Comic Con screening of Doctor Strange last week. It was fun to watch a new MCU movie with a group of excited and eager fans—kind of a cross between a family reunion and a pep rally. When I got back to Provo, the first group of friends I ran into asked me how good Doctor Strange is and how much I liked it. You probably want to ask me the same thing, so I’ll tell you the same thing I told them. It’s not as good as Marvel’s best like Guardians of the Galaxy. I don’t think it’s as good of a film as Captain America: Civil War but then again there’s some bias to that. I don’t LOVE it like I love The Avengers or Captain America: The Winter Soldier. But it is better than Thor: The Dark World and Age of Ultron. I would put Doctor Strange in the same category as the first Thor film or the Iron Man films as far as both enjoyment and quality. As far as its place in the MCU, it doesn’t tie into the previous films hardly at all, which it didn’t need to, but I feel like it is going to be a set-up for a lot of things to come.

Don’t get me wrong, the visual effects are amazing like they’re supposed to be. But there wasn’t a lot of context for the smoke and mirrors. You don’t really get to see much besides the dark time-bending and the portals they’re always conjuring. They didn’t really establish why Doctor Strange messing with time was such a big deal and kind of glossed over Kaecilius’s backstory. And I feel like I know more about alternate realities and the multiverse from my own speculation and research than I learned about in this movie. I really expected Marvel to have a cooler take on that instead of just saying, “Oh, by the way, this is a thing.” I know this is supposed to be an action movie and we don’t have time for a long-winded lecture on how the mystic arts work, but there wasn’t really enough for me to connect. However, I was impressed with the battle in the Sanctum. I also got a huge kick from the astral fight in the hospital with Christine Palmer freaking out. And the mid-credit scene is a total win!

A Web of Incredible Characters

For the most part, the film focuses on the story, but there are moments when it pauses to give us nuanced views of the protagonist and the supporting characters. The Ancient One was definitely nuanced. She doesn’t explain herself completely, but “she’s complicated” was a great way to describe her. Plus, it’s fun to watch her give Strange a hard time.

I really liked Mordo’s arc. I’d even say he was the best-developed character in the film. It goes without saying that I am stoked to see Mordo in Infinity War. I want to see him team up with Helmut Zemo—they could really make a mess together (for some free speculation, check out this post on my Tumblr—or I can just screenshot it to Facebook later). Kaecilius was developed enough for the main antagonist, and it was an interesting moment for both hero and villain when Strange decided to listen to his side.

But why isn’t Dormammu the MCU big bad? As much as I am threatened by Thanos I am much more threatened by Dormammu. Here’s my big theory: Thanos needs his bedazzled Infinity Gauntlet to keep Dormammu from interfering with his plans for conquest.

Christine Palmer: I love her. She’s awesome. She was everything she needed to be—a supportive friend and possible love interest for Strange but also someone who doesn’t take crap from him. Do I support her being in a relationship with Stephen? Yes. Wong is also fun to watch. Considering that Benedict Wong and Chiwetel Ejiofor were both in The Martian I was looking forward to their performances in this film and was not disappointed in either of them. I like how Strange and Wong’s relationship was developed and I am really looking forward to seeing Strange and Wong work together in future films.

But the award for best supporting character goes to the Cloak of Levitation. I kid you not. This is the MCU’s equivalent of BB-8: quirky in personality and devoted to its master but not someone to cross. Kind of stole the rug from under Cumberbatch (see what I did there?). 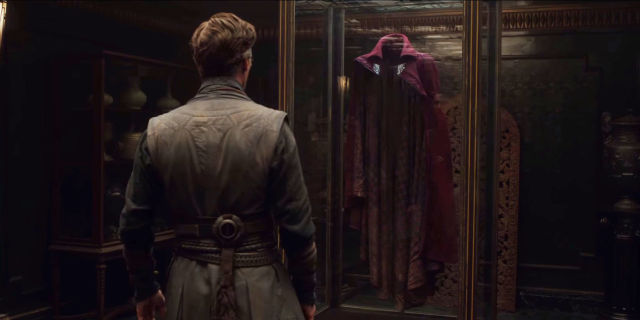 The Doctor in the House

I would never let a guy who listens to music during an operation do brain surgery on me. That’s grounds for a malpractice suit, I’m just saying. But Stephen Strange’s arrogance is the type that lends itself to humor and it’s entertaining. I’ll admit, the first fifteen minutes or so I felt like I was just watching Benedict Cumberbatch show off an American accent. After the accident Strange’s dark side comes out when he lashes out at Christine—his drive to beat the odds, his refusal to accept how the accident affected his life, all of that is movingly expressed. I’m not saying I like watching people get mad, I just thought that was well done. There isn’t a lot of development for Strange after that, like I don’t think any of the things he goes through change him that dramatically or relate to where he is as a person, minus his touching farewell to Christine. Yes, I know that’s a strong remark considering how all of the marketing leading up to the film focused on Strange’s development. But I felt like it didn’t deliver. I’m more impressed with his messing around with magic at Khamar Taj. It’s showing-off and not really different from what he did as a neurosurgeon, but that’s how Stephen Strange learns: by testing the limits of his abilities. But if I’m being nitpicky here, it’s an opinion based on having seen Doctor Strange once—and from having seen Cumberbatch carry a lead role in just this film. I think there is a lot more to Stephen Strange, and we will be seeing that in Infinity War and other MCU films to come. Having said that, he’s a cool superhero with awesome powers and an even awesomer outfit and I do want to see more of him.

Overall, Doctor Strange isn’t quite what I was led to think it would be, but it’s definitely the pick-me-up I needed after Civil War and a hearty appetizer for Infinity War. There is lots of mesmerizing eye candy and fun action scenes to boot, and it had just the right balance of humor. The supporting cast is entertaining to watch and Doctor Strange himself is a welcome addition to the Marvel Cinematic Universe.

Jason Hamilton’s review for All the Timelines